On and off the loom 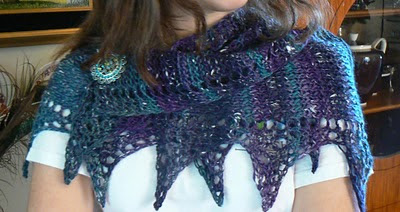 Quite a few projects to share with you today! The first photo is of the Abalone Lace Shawlette, now blocked and modeled by my youngest. 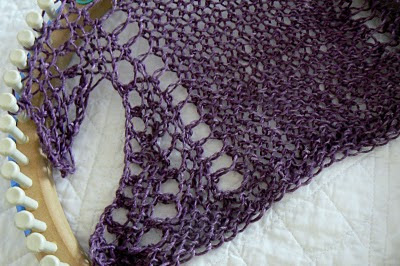 The second photo shows another version of the same lace shawlette, but in a lighter weight Noro DK yarn. Even on the loom, the stitch pattern appears much more open in the DK. This is a great example of how a change in yarn may reshape a pattern entirely. I get a kick out of how the lace points look as they appear on the loom. 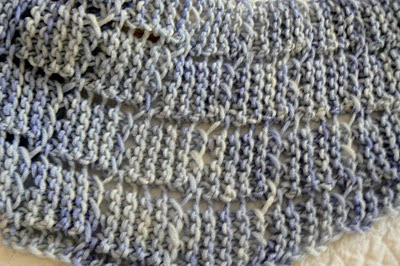 This third photo is another lesson in change the yarn, change the pattern. I'm making a "Sunflower Spring Shawlette". When I wrote the pattern last year, it was for the lovely Tencelino (merino wool, tencil blend) that Helen Jacobs-Grant dyed for me. It was made from 2 strands of sock yarn held together for a dk weight. This time, I'm using another hand dyed yarn, but in all wool, worsted weight. The stitch pattern is much harder to see, although the shawlette is looming up very nicely. It will need blocking, and to accommodate the blocking size increase, I decreased the pattern from 33 to 27 pegs. 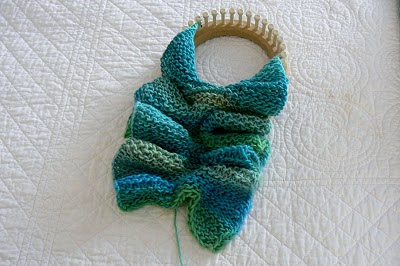 The last photo is a little ruffled scarf with the working title "Ivory Shell Scarf". It is made from the new Knit Pick's yarn, Chroma worsted, in the Galapagos color. This is such a fun scarf to loom. I often make scarves when I'm testing a new technique, and this will be a test for a loomed ruffle edging. The long color changes in the yarn work perfectly for this pattern.
What's on your loom?
Copyright 2011 by Invisible Loom and Craft. All Rights Reserved. Personal Use Only.
Posted by Invisible Loom at 12:42 PM 6 comments: 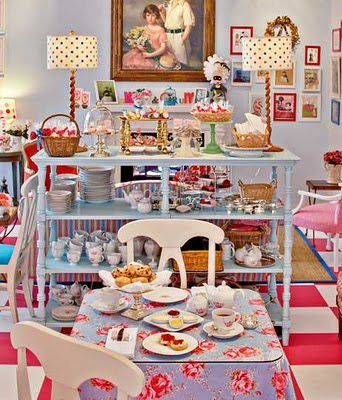 A very dear friend recently treated me to tea at two different, yet very lovely, tea rooms in San Francisco. The first, in the photo above, was The Crown and Crumpet Tea Salon. Everything about this tea room was delightful. Their motto is "A Room with Tea and Wit." As you lift your teacup, each saucer is revealed to have its own clever saying. The Crown and Crumpet lived up to its name with delicious crumpets, sandwiches, and sweets. The teas at the Crown and Crumpet were also outstanding. Crown and Crumpet is located on the Bay, in Ghiradelli Square. The second, different but equally enjoyable, was Lovejoy's Tearoom. The location was nothing special, but the room was very welcoming, overflowing with cushions and comfortable chairs. The scones and tea sandwiches were particularly good at Lovejoy's, and the addition of a fruit plate was very nice in a full tea. Both rooms had shops that were, again, different but delightful. Lovejoy's was a second hand shop, with vintage tea cups and tea wares. Crown and Crumpet had new, stylish tea ware, with the official Crown Teapot being my favorite. Both tea rooms have web sites that you can view to learn more about them.
Posted by Invisible Loom at 10:39 AM 1 comment:

On and off the loom 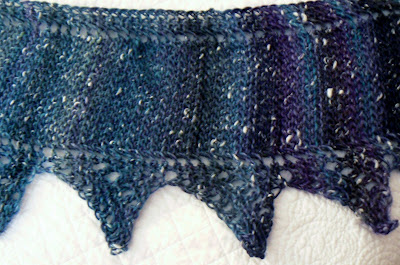 Almost off my loom and ready to block is this lace edged shawl. I'm thrilled with how it is turning out, after many many tries and failures. The pattern will be more of a challenge than others I have written, with a 22 row repeat. But I found that after 2 repeats, I had it all memorized and could work without notes. The yarn does not photograph well, but after blocking you should be able to see the lace details in the stitch pattern. 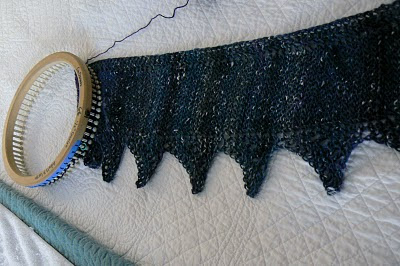 Speaking of stitch patterns, Made by Telaine has some recently posted stitch pattern conversions for the loom as well as a fun shared knitting project she is moving from needles to loom and back again. Brenda, our Loom Lady has outdone herself with Valentine loom projects, and Helen MyHeartExposed is justifiably honored to have her incredible sweater, all loomed, all homespun, all hand-dyed, published. What great inspirations they all are! Copyright 2011 by Invisible Loom and Craft, Renee Van Hoy. All Rights Reserved. Personal Use Only.
Posted by Invisible Loom at 12:26 PM 3 comments: 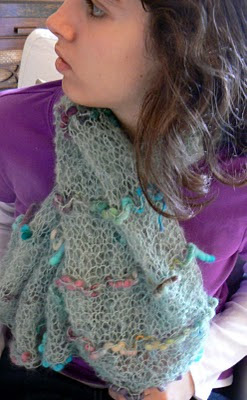 The fabric of this soft wrap takes inspiration from the colors and contrasting textures of the sea shore. The soft mohair yarn has an open, wavy stitch that “catches” the hand spun in its threads. The hand spun is left with loose ends to mingle with the lacy threads. Opposites play together to make a soft wrap or scarf that is a delight to wear. 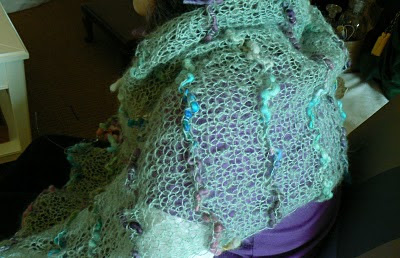 This is a project I truly enjoyed making for the loom. It shows once again that thin yarns will work beautifully on a loom. Here, the 5/8 inch gauge purple Knifty Knitter hat loom was used. A 1/2 inch loom will also work. I also liked playing with the e-wrap stitch to create a fabric that has the look of unstructured lace, while it is made in a very structured way, and making a new stitch pattern as well. The wrap itself is very enjoyable to wear both as a shawl or a scarf. 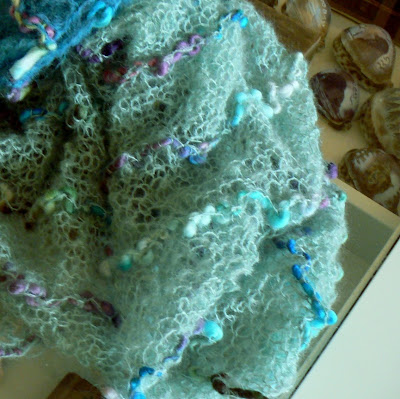 The pattern is available from Ravelry as a large print pdf download. If you need a plain text version for your screen reader, please leave me a message and I will send it to you.
Sea Glass Wrap $4.50 US
Please let me know how you like this pattern.
Copyright 2011 by Invisible Loom and Craft, Renee Van Hoy. All Rights Reserved. Personal Use Only.
Posted by Invisible Loom at 8:13 PM 1 comment: