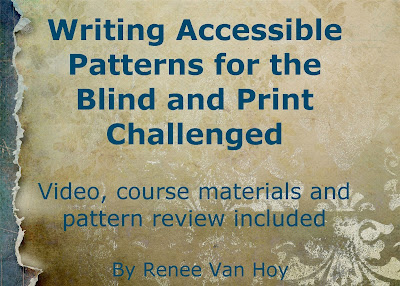 I am very excited to announce that because of help from a wonderful knitting designer, Nicky Jensen, the Accessible Patterns Index is a reality!
http://accessiblepatternsindex.com
We are building it now, but you can already find links to 65 designers who have written patterns to be accessible for the blind and print challenged. What does that mean?
Large font, a minimum of 22 - 24 point; sans serif font. All black text, no italics, and best of all - all of the directions are fully written out. If there is a chart, the pattern must be able to be made without reference to the chart. In addition, many of the patterns have been specially written for screen readers. They have fewer abbreviations and have been tested for clarity. We have about 600 knitting, crochet and loom knitting patterns that we will be adding individually. We are also indexing books from the National Library Service for the Blind and Print Disabled, Bookshare, and other sources in press braille, digital braille and digital audio. These books have not been specially formatted in the way the patterns are, but are transcriptions of the original print books.
The index relies on donations to pay for the host site, so if you like the idea please consider making a small donation .
If you are interested in learning to write accessible patterns, all proceeds from sales of my course on Writing Accessible Patterns for the Blind and Print Challenged support the index. The course includes a 45 minute recording of a live class, course materials and checklists, and a free pattern review.
Posted by Invisible Loom at 11:59 AM No comments: 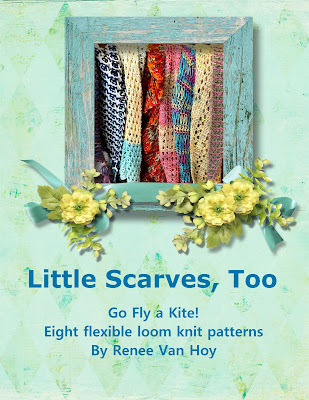 I am very happy to announce a new pattern collection, Little Scarves, Too: Go Fly a Kite!
This is something of a sequel to my earlier collection Little Scarves: Baktus and Karius for the Loom. In this new collection you will find 8 unique patterns in a pennant or kite shape. Each pattern is entirely flexible. You may choose the loom, the gauge, the yarn that you want to use. The pattern has a little table that tells you how many pegs to cast on and how many repeats to work based on the size loom that you choose.
A little scarf may be made on a large hat loom. Here are the options (peg counts) for each gauge:¾ inch: 40, 41 or 42 pegs5/8 inch: 48, 50, 51 or 54 pegs½ inch: 60 or 66 pegs3/8 inch small: 72, 80 or 82 pegs3/8 inch fine: 90 pegsContents1. How to use these patternsChoosing a loomUsing the list of row repeatsHow much yarn you will needSample sizesMaking a cowl sized scarfMaking a shawlBlocking your scarf2. Stitch guide3. PatternsFlying AboveHigh FlyerNot Really StormyOn a WingOne RainbowSimply Clear SailingRuffled Clear SailingWinter Sky Love4. AcknowledgementsTwo full digital volumes are included. The 104 page low vision and screen reader accessible version is written in all black, 24 point Arial font. It has no italics and the directions are fully written out. In addition, special charts and chart keys have been created of the row repeats in an enlarged version for low vision users. The patterns do not rely on the charts and may be made without referring to them. The 54 page small print version is written in 12 point font and has reduced sized charts and schematics.
You can purchase the pattern e-book in my etsy shop:
Little Scarves, Too $12.00 US
Here are photos to give you some ideas of the possibilities for these patterns. You have size options, for a scarf, smaller cowl sized scarf, or keep on knitting to make a shawl. 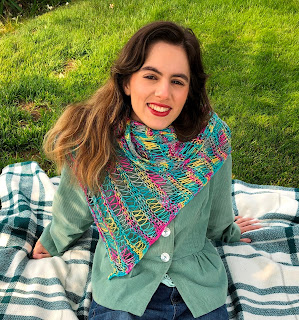 One Rainbow, a drop stitch scarf shown here in a variegated yarn of pink, teal, and yellow 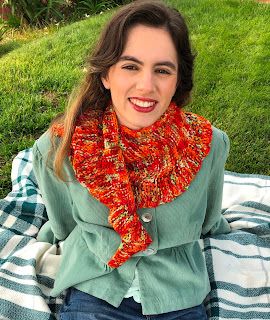 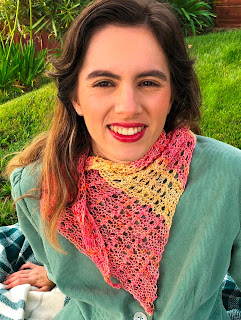 Flying Above, shown here in the smaller cowl size in peach and
soft yellow yarns. This scarf has options for color blocking
that you can design 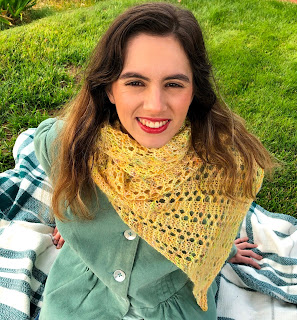 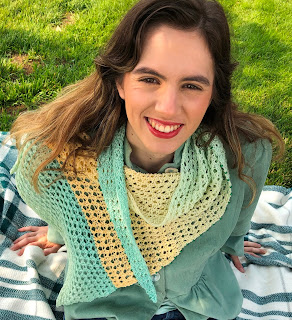 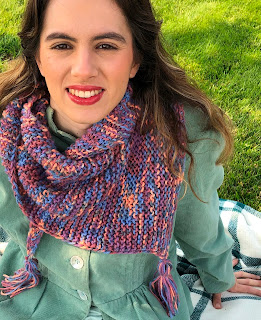 Simply Clear Sailing is a very easy garter stitch scarf, shown here in a fun variegated yarn in purple, blue and peach, with
yarn tassels on the corners 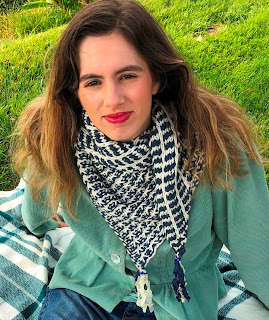 Not Really Stormy uses a tuck stitch that creates a two sided scarf. The photo here shows it in two colors, navy and cream, but only one color at a time is used making it a very easy knit
that only looks complicated. 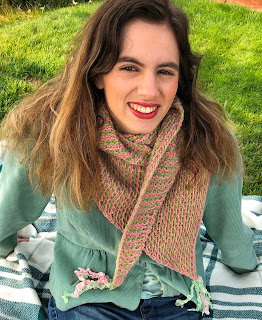 On a Wing is another scarf with a different pattern on each side. It is made with a simple slip stitch that looks terrific in two colors, as shown here in pink and soft green, or in a solid.
Little Scarves, Too: Go Fly a Kite!
I hope you enjoy this new pattern collection!
Renee

Posted by Invisible Loom at 11:37 AM No comments:

There are over 500 patterns on rav with the low vision accessible pattern search tag. Many of them are my loom knit patterns, but about two thirds are from designers who recently worked to create accessible versions of their patterns.

The problem is that rav is now inaccessible to the very people who need to find these patterns. Parts of the new site work with screen readers, but others do not. Beyond that, the new site continues to cause harm to people who use it. The epilepsy foundation has issued a caution warning for the site.

These are the steps I am taking. I am able to use the "classic" for limited times, so I have begun to download and gather over 10 years of information I had stored on rav.

I am moving my pattern sales to etsy.com. If you try to buy a pattern from this site you may find a broken link. If that happens, please go to my etsy shop:

It is a long process to move the patterns and adjust all of the links, so please bear with me. Many of my patterns are also available through CinDwood Looms.

I am hoping to create an Accessible Patterns Index off of rav. In the beginning, it may very simple, but at least there will be a way to find these patterns without having to use rav.

Posted by Invisible Loom at 6:45 PM No comments:

In June, the crafting platform rav introduced a new format. This format immediately caused many (hundreds, thousands?) rav users to experience severe eye strain, eye pain, migraine headaches, regular headaches, vertigo and seizures. After a few days of discussion, rav put the "classic" view in as an alternative, providing you could tolerate the new site and make the selection. The "classic" also caused problems, not as severe, but significant eye strain and headaches are common. Worse yet, screen readers did not work with the new rav. They had never been great with old rav, but they were worse with new rav.

Nearly two months later and rav denies the pain and suffering it has caused, threatens to remove "classic", shuts down all discussions on the topic on the main discussion boards, and shows that rav does not care about accessibility at all. They say rav is more accessible than ever.

I have always written accessible patterns for people who are blind or have print challenges. I do this because I need to see the patterns in this way. About a year and a half ago I began working with a group on rav called Accessible Patterns. Rav had created a search tag called Low Vision Accessible, but had failed to define the search parameters. I worked with rav based on the discussions in the group, and created a minimum standard for the search.

Rav failed to put the standard into place until nearly a year after they agreed to it, during which time I followed each pattern using the search tag, contacted the designers and made sure the tag was used correctly and information about what made the pattern accessible was in the pattern notes.

Rav had also agreed to implement a screen reader search tag, but never added it. They would not agree to add search tags for press braille, digital braille and digital audio books, which would have allowed me to add the books from BARD, The National Library Service for the Blind and Print Challenged into the pattern database.

When rav showed it did not care about accessibility, I was not surprised. They had been showing this was how they felt long before the new rav.

Posted by Invisible Loom at 6:35 PM No comments: 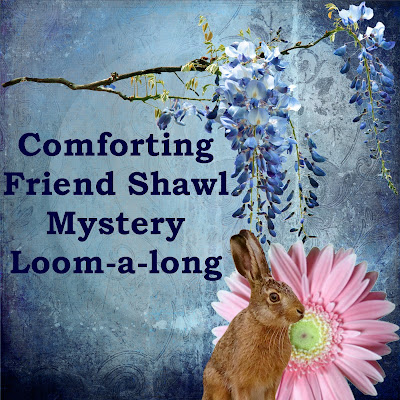 The Comforting Friend Shawl was designed based on a poll taken in the Ravelry loom knitters group. That means it will have a little something for everyone, a few surprises along the way, and variations to make it a little easier or a little more interesting, depending on your preference.
The MLAL price of $1 will end after the first week of the loom-a-long, on May 2, 2020.
The loom-a-long will be hosted in the Loom Knitters group. The pattern page is found here.
Loom:Two shawl sizes (actually two patterns) will be available. Both are written for a ½ inch gauge loom. You can also use a 7/16 inch gauge loom or Kiss regular gauge loom, set for ½ inch gauge.
The smaller size will need at least 59 pegs flat knit.
The larger size will need at least 88 pegs flat knit.
Yarn: The pattern offers several options for yarn and color. One uses a single yarn with a second contrast yarn, and the other will combine four yarns.
Schedule:
The pattern clues will be released once a week on Sunday:
Clue 1: April 26thClue 2: May 3rdClue 3: May 10thClue 4: May 17thCatch up week: May 24th
Why does the pattern cost $1?
Ravelry has pattern updates only for paid patterns. A small charge allows me to easily deliver the clues to you each week. You will also receive the final pattern put altogether and any future updates.
More questions? Come visit the Ravelry Loom Knitters group and ask there.
My patterns are low vision and screen reader accessible. The text is black, Arial and large print 24 point font. All of the directions are fully written out and no charts are relied on to complete the patterns. No italics are used. They are screen reader and tablet friendly. If you have any questions, please send me a message.

Copyright 2020 by Renee Van Hoy, all rights reserved.
Posted by Invisible Loom at 8:47 PM No comments: 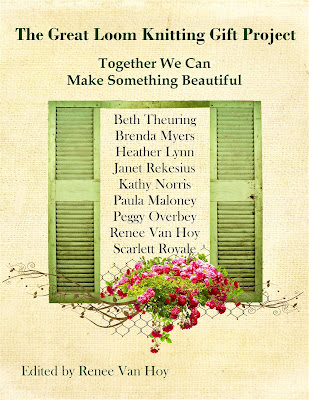 I am very happy to announce that pre-orders are now being taken for The Great Loom Knitting Gift Project e-book. 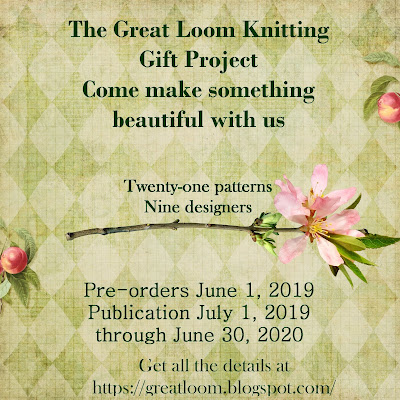 All proceeds from sales of the e-book will be donated to Doctors without Borders. To see the patterns, please visit Ravelry.

To order the book, please use this link:

I have four patterns in the e-book: 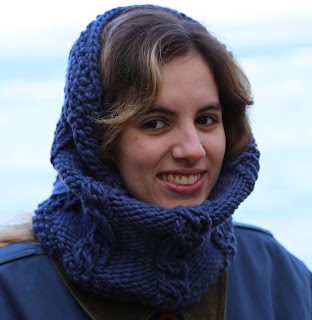 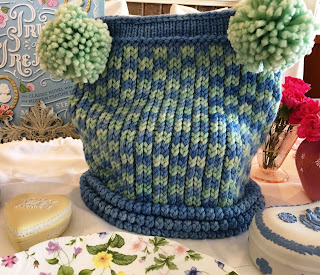 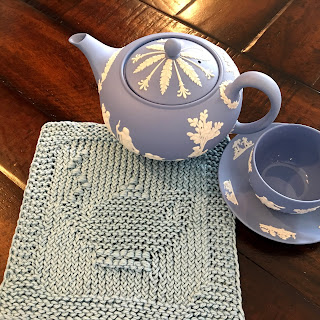 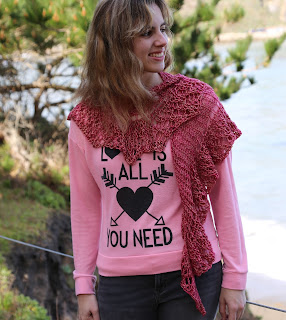 Pre-orders and purchases through July 31, 2019 will receive a coupon from CinDwood Looms and be entered into a drawing for a CinDwood Loom.

Pre-order purchases during June, 2019 will also be entered into a drawing for a $25 gift certificate from Prancing Pony Pottery.

Thank you for supporting this fundraiser for Doctors without Borders.

Posted by Invisible Loom at 12:34 PM No comments: 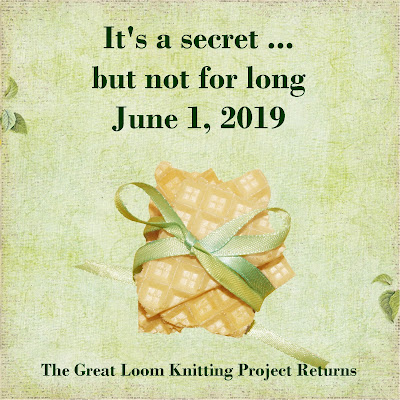 Posted by Invisible Loom at 10:31 AM No comments: